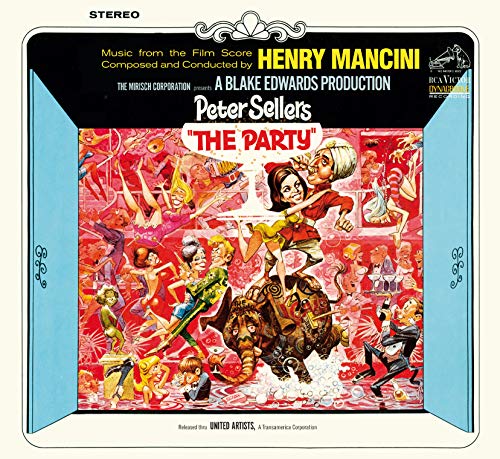 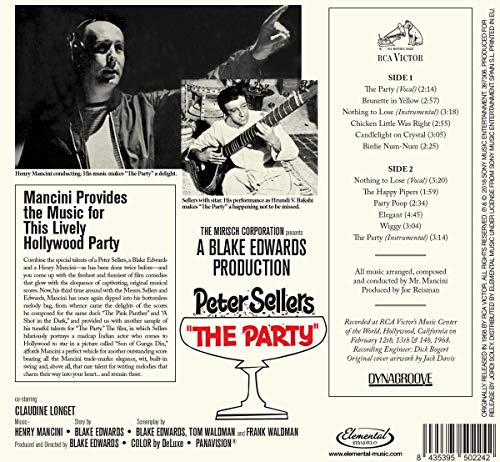 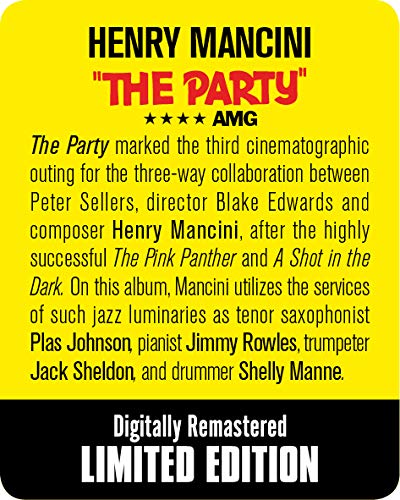 MINI-LP PAPERSLEEVE GATEFOLD REPLICA – Elemental Music, together with Sony Music Entertainment, is proud to present a new CD reissue of the 1968 movie soundtrack The Party by the Oscar and Grammy-winning composer, conductor & arranger HENRY MANCINI. The Party was the third hilarious outing for the threeway collaboration between Peter Sellers, director Blake Edwards and composer Henry Mancini, after the highly successful The Pink Panther and A Shot in the Dark. Peter Sellers stars as the sitar-playing Indian actor Hrundi V. Bakshi, along with the lovely Claudine Longet, who makesone of her few film appearances here. The hilarious movie is set to one of the greatest scores ever by Henry Mancini. The tunes are very groovy, featuring a few vocal chorus numbers, as well as sitar, guitar, and horn blasts. The music is played by a superb group of L.A. jazzmen, such as Shelly Manne, Plas Johnson, Jimmy Rowles, and Jack Sheldon. Titles include instrumental and chorus versions of “Nothing to Lose,” “Chicken Little Was Right,” “Birdie Num Num,” “Party Poop,” “Wiggy,” and “Brunette in Yellow.” – Recorded in RCA Victor’s Music Center of the World, Hollywood, California on February 12th, 13th & 14h, 1968.

Be the first to review “Party Original Soundtrack” Cancel reply

Added to wishlistRemoved from wishlist 0
Add to compare
$55.55